What are F1 Labradoodles? Why do I care? 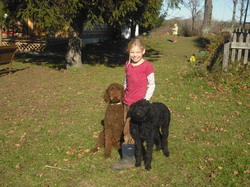 F1 Labradoodles are the first cross between a purebred Labrador Retriever (most popular breed in America) and a Standard Poodle - making one of the most awesome dog hybrids ever.   F1B Labradoodles are a cross between a Labradoodle and a Poodle, so you get a more Poodly, less-likely-to-shed pooch. ( F2's are more Doodle crossings-not our gig...) Anyway, we at Adirondack Labradoodles started with Dolly, one of the greatest chocolate Labs known to man - smart, affectionate, obedient, and non-shedding (I know "non-shedding Lab"  looks like an oxymoron, but ask former customers and friends, they can confirm it--she's part otter!)  We then bred Dolly to Chaco, one of the best looking, most friendly Poodles known to man, and what you get are healthy, friendly, smart F1 Labradoodles, and what more could you want?  Well, maybe you want an F1B!  Dolly's F1 daughters are now bred to Prince, the AKC poodle, giving F1Bs (three-quarters poodle)- curlier, less potential allergen, and unbelievably cute! Call us to discuss! Or go to contact page and fill out the e-mail form!

What are F1B Labradoodles?  What is a Mini vs. Standard?

F1B Labradoodle is a fancy, but simple, way of stating the genetic mix. This means your Doodle is 75% poodle. (Side note: We all know Labs are awesome, and Poodles have a slightly less stellar reputation. For the record, Poodles are originally hunting dogs, and they are smart and beautiful and we love ours and we know you'll love their offspring! But we still love Labs enough that they have to be in the mix!!) F1 as you read above, means First cross, 50/50 of Lab and Poodle. This is where it all starts. But if you want more curly cuteness, which also has the benefit of less chance of allergens and shedding (again, we dont guarantee hypo-allergenic or non-shedding, its just likely), you get another Poodle stud and breed him to your loveable F1 ladies, which is what we have done. Prince for the standard chocolates and Pierre the toy poodle for the minis. And that answers the question of what is an Adirondack Mini-labradoodle: it's an F1 Doodle crossed with Toy Poodle -- and Pierre is a sweet boy! Well-built, for an 8 pound dog, and very friendly and smart as anything. The puppies from Pierre and Sandy won't be super miniature, you might call them medium-sized. We estimate 25-35 lbs (just depends to some degree on which genes get the upper hand, its a hybrid!) Other really mini-labradoodles usually have some kind of spaniel or other small breed mixed in to get that really small stature in fewer generations, but that's not what we're about here at Adirondack Labradoodles. We just see a demand for a slightly smaller, handier sized Labradoodle (which we can appreciate), so we have made it happen! In any case, we love these Doodles and we know you will too!

Male or Female? What gender of dog do I want?

I'm sure you can read blogs on the internet that explain the intracacies of dog personality based on gender-- go for it-- but i will give you my opinion (this is Andy, the dad, head dog-care guy, dog-lover and website guru) even though it won't help you much! I am of the opinion that the sex of your dog doesnt matter much at all in their personality. If I had to put a percentage, I'd say 10% :) The biggest thing is how you train your puppy. If you take a "dog leader" approach and provide a happy, healthy, structured, and socially active life for your pup, their personality will be happy and social and affectionate almost without fail. I would say, in addition, that you can't "guess" their personality based on 20 minutes of observation at 5 weeks old. You can see what they are in the moment-- i.e. energetic due to having gotten a little extra food at the bowl, or bossy due to that day's energy and a slight upper hand in the latest wrestling match, or friendly due to not getting enough kibble and hoping you, the human, can provide the extra, haha, or shy, possibly due to being tired or having just gotten bit on the ear by a littermate and not over it just yet. You see what I mean? The biggest ingredient is you. Dogs reflect their leader's values in a big way (or they come up with their own values if they are left to themselves or allowed to bully their owners). So sorry to put the pressure on, but you determine most of your dogs personality. And its not that hard! Have a plan, keep your standards of behavior high for you, your kids, and your dog during the formative months, and have fun! In closing, some say males are more gregarious and energetic, and females are more loyal to the alpha and moody, which may be true to a small extent with un-neutered animals, but we are assuming you are buying a family dog and are planning to neuter them, so once hormones (and all the corresponding mess and moods) are cut out of the mix, you got a friendly smart breed that will repond well to good training and become "the best dog we've ever had" no matter what the sex! 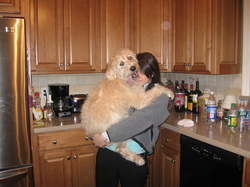 Quick answer- Usually.  Our customers have said "Yes", and some had existing dog allergy issues.  Long answer-  Thats hard to say, each puppy is different.  Again, similar to the shedding issue, no one in our circle has ever had a problem with our Lab, Dolly, and Poodles are known to be less allergenic.  So basically you're not likely to have problems, but its always possible that a highly allergic person could have an issue.  In that case, pets might not be a good idea in general if you are highly allergic, or you may want to invest in a Labradoodle from a multi-gen breeder that has tested and proven hypo-allergenic dogs. Anyway, we hear that our Labradoodles shed little and don't cause allergy problems, but we can make no guarantees on either trait.

How important is a health guarantee?

Quick answer--we think its important.  It shows that your breeder is confident that they won't sell you an unhealthy puppy.  Our health guarantee is aimed at passing that confidence on to you, and giving us both a clear path in case there is an issue.  We haven't had to revisit it with a customer yet...

Why is the deposit non-refundable? 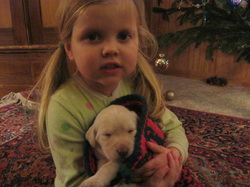 Your deposit IS refundable if you change your mind BEFORE the puppies are born and your choice of color etc, is confirmed.
We have the task of finding good homes for all of these puppies, and since puppies grow and develop, we need to do this in a timely way once they are born, so they can be a part of a forever family from the time they're weaned.  If we allow people to reserve a certain puppy and then back out 3 weeks later, we are way behind in finding that home.  So the extra time, effort and advertising have to be paid for and that's where the deposit comes in.  Of course, for those who stick by their choice and adopt their Labradoodle puppy, the deposit goes toward the total cost of adopting the puppy!
Advice for Housebreaking and Crate training

My advice on this is as follows,  " Don't backslide!"  When you receive your puppy from us, it will be sleeping in a crate through the night with no accidents.  Every morning at 6am it will be used to running straight outside and hitting the grass to do its business.  Make sure you set an alarm and get up for the morning blitz.  Then as the weeks go by the puppy will be more able to just walk outside calmly before needing to go. Of course, what you will most likely have to deal with is crying.  Most puppies will have been with litter mates until the day they come to you, so that brings a bit of loneliness to their first nights alone in a new crate. As heartless as it may seem, we find it helps to put the crate in another room and ignore his cries.  I know its tough to hear him fuss, but if he's fed, watered, and been outside to the bathroom, had some hugs and has a blanket and toy, then he's just pressuring you to get his way.  You make the rules, and no crying is one of them!  Stand strong, shut the door, turn up the music, and ignore him, you'll be happy you did!   He'll obey better in every way.   As far as daytime housebreaking goes, the key to that is making sure that you let puppy out immediately after meals, and only introduce a water bowl inside, once feeding and going out is well established.  What you don't want to do is leave a puppy knocking around the house for long periods unsupervised.  Then they will have no choice but to find a spot to relieve themselves, and then you will have an issue to resolve.  If you keep them supervised in your living space, or outside, or in a crate at all times for the first few weeks, it will probably never be an issue!  And you'll say like so many others  "Our puppy is so smart, I can't believe how easy she was to potty-train..."  Smart people make our dogs look good!  Be smart!

You've got to do the training early- and these Labradoodles will be "the smartest dog we've ever had--soo obedient"  or if you're lax, maybe not.  Be a dog leader not a dog follower!  Hope this helps -- and please find a book or a website with a method you trust, if this advice seems unhelpful or incomplete.